It is Really the Tip of the Iceberg This Time 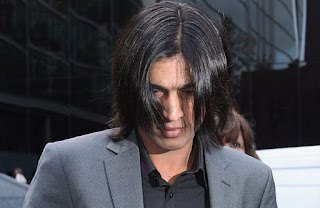 When Henry Blaxland narrated the mitigation plea of Mohammad Amir, who was sitting in the glass chamber approximately at 90 degrees angle and 3 metres in distance from me, every word of it felt like a knife being stabbed into one’s ribcage or like the scripting of an epitaph of someone you loved. Here, it was for a cricketing career that was arguably the most promising since a certain Tendulkar faced Imran and the Ws amidst a bloodied shirt in his debut series. From the disclosing of how Amir stood in front of the mirror wearing the Pakistan shirt given to him the night before his debut to his acquiescence of any punishment to be handed out by the court, the intensity of every phrase gave way to the feeling of something that had been irretrievably lost. It was agonizing watching him lower his head, periodically recoiling; it was just heartbreaking.
And yet, all of it was just words. Or so they ended up, as in the eventual scheme of the events for any hope, lying naked in the recesses of hearts feeling for the teenager, all but died the very next day.
---
For starters, let there be no doubt whatsoever that the three of them cheated. And the price tag of their assorted sins was always going to be hefty in context of the brass tacks that eventually surfaced. Whether it was entrapment (by the Fake Sheikh) as suggested by Michael Atherton or the sheer ineptitude with which Butt and Majeed administered the fix, the fact of the matter is they did get involved in this villainy and defrauded millions of cricket fans and the game itself, along with shaming their families and a nation.
There should be no denying that these players were a product of a defective system which bred corruption in its various demeanours, and had grown up deifying players who dominated the glorious 90’s with such power that could only be collated with the army of that country. Add to it, the distorted legacy of the glitched up Qayyum report and its frailty, the susceptibility of them falling prey to a well orchestrated money-spitting net was supreme. 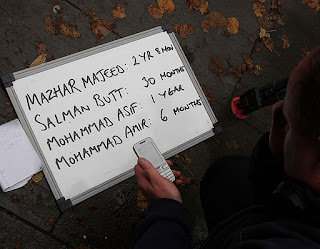 The unfolding of their wrongdoings was beyond an iota of doubt, well for most people who had followed the case intently. The guilty plea of Amir and the subsequent 4 weeks long trial of Asif and Butt, which was akin to thieves turning against each other, left little margin for them being exonerated by the jury in the criminal case. The custodial sentences were announced and they are said to act as deterrents for the game of cricket through the Judiciary of England and Wales.
Or are they as such?

Here was a judicial system which had acquitted the likes of Bruce Grobbelaar, Matthew Le Tissier and John Higgins, in spite of possessing seemingly ample credential of corruption handed monetary fines. A justice system which had dwindled away in corruption cases related to sports in the recent past - like in the Grobbelaar’s case, the overturning of the initial libel jury’s verdict – would always force this question to be ascertained: “Do you really have a concrete belief in the system?”
---
Then there is the curious case of Anti Corruption and Security Unit (ACSU). The Anti-Corruption Unit of the body had operating expenses for 2010 of 877, 000 USD and yet was unable to find a single maligned event in the game over the year when there's been smoke all over. From fearing about rogue elements in the game a few years back to being called a ‘toothless tiger’, it has yet to come up with a single implicative exposure.
Fair enough that ACSU is not a law enforcing body, but if sting operations such as these have to be effected by newspapers – in this case by one that no longer exists - where do we find the authority for such a body? How do we stop seeing it as an organization that alienates itself from methodologies that should be applied to investigate the corruption in the game, and have it not make a joke of its own integrity by reopening already run alleged match-rigging cases? Or starts taking seriously the recommendations from the likes of protagonists such as Rashid Latif, and just not be handing out cushy jobs for former policemen with zilch authority.
During the proceedings, Ravi Sawani amazed everyone when he revealed he did not even know what ‘brackets’ are, even on the Unit claiming it has had a fairly extensive reach in the betting world. It’s the same apathy, which enables Lord Condon to advise enforcing bans on countries involved in cricket corruption. If that were to be the case, then we might end up with Test nations that can be counted on fingers in one hand, for it simply is not a country-specific issue (Mervyn Westfield should agree).
It has been reported that the employment of cricket-savvy personnel has been recommended in the Unit, pretty much annulling the mindset of having police and military officers run its affairs meticulously. Along with the scrutinizing of cricketers with non-detailed monetary wealth, this sounds as a form of overhauling of ACSU. How much do these steps, once executed, cater to the exposure of corruption in the game is to be seen.
--
Pete Rose, in the 80s, bet thousands of dollars on the game which made him world famous. He was banished from baseball, but was not sent behind bars. There are other analogous examples of dismissed careers of rogue men in various sports over the years. In fact, this has been the first instance in the last 50 years when sportsmen have been sent to prison. For this specific scandal, rightfully christened as the grandest of its kind in cricketing history, those who are part of the lynch mob would always profess that justice was served and some of the antagonists may even want severer sentences, disregarding the fact that the already handed out ICC bans have potentially sealed their playing careers.
These prison sentences could be seen as deterrents only if uniformity in legislating legal cricket betting is adopted and jurisdictions which were utilized for trying the trio in court are replicated in other playing countries. Australia, for one, desires to make fixing illegal by next year through specialized legislation, which, undoubtedly, would have to be seen as a major step.
Perhaps the argument here intersperses more between condemning a justice system that doesn’t seem to function on level playing field and being dismayed over an organization whose productivity begs answers with not much to show on paper, advocating the view of custodial sentences in this case being seen as a mopping up affair rather than significant deterrents.
Even though our collective moral compasses may never be aligned to come to a consensus on whether putting the three players behind bars is impediment enough, but few people would disapprove the frightening scenario in which a teenager like Amir would have found himself in facing the underworld threats and then to come clean. If my visits to the Southwark Crown Court have forced any realization, it is that the vagaries of on-field betraying acts have less to do with the criminal courts and are more concerned with the actual fabric of the game, the principles it stands for and the authorities that are meant to be providing it the due protection.
"Tip of the iceberg" - you said it when Hansie did it, when Azhar was 'nailed' and now you have labelled this the same. “It’s not Cricket”, Justice Cooke remarked in the opening sentence of the verdicts, which I’m pretty sure we have heard before in the previous years.
Don’t let these clichés fool you time and again, dare I say.

- This post was first published at The Sight Screen.
Posted by Masuud at 2:51 AM

Can I simply just say what a relief to uncover an individual who actually knows what they're discussing on the net. You actually realize how to bring a problem to light and make it important. More and more people really need to check this out and understand this side of the story. I can't believe you are not more popular given that you definitely possess the gift.
Feel free to surf my web page ... borkum riff

Hey there, I think your blog might be having browser compatibility issues.
When I look at your blog in Ie, it looks fine but when opening
in Internet Explorer, it has some overlapping.
I just wanted to give you a quick heads up! Other then that, wonderful blog!
my web page :: tattoo removal cost

It's nearly impossible to find well-informed people for this topic, but you seem like you know what you're
talking about! Thanks
my website :: http://insainia.com/?module=VilmaCarna&params=24346

Thank you for the good writeup. It in fact was a amusement account it.

Look advanced to far added agreeable from you!
However, how could we communicate?
Also visit my homepage ; how to get rid of acne fast at home overnight

Ahaa, its pleasant dialogue regarding this article at this place at this
web site, I have read all that, so at this time me also commenting at
this place.
Feel free to visit my webpage - www.khushkhabari.com

well buddy if you ask my opinion about that, I think it is close to the tip of the iceberg and I think there are few things that we don't know about it yet

If you are among those People who need to invest their money in something tangible in Uganda Don.
Just give them the price you want to pay for the house minus 6% - 7% and if they ask how
high you are willing to go, tell them that's it. Property - Hookp takes uses advanced link building and promotion tools to optimize your profile for search engine ranking.

Pretty good post. I just stumbled upon your site and wanted to say that I have really enjoyed reading your site. Any way I'll be subscribing to your feed and I hope you post again soon.

Find best Home based Business without any work, just invest and rest with your profit
EarningsClub.com

Nice one. You people can take help from the latest sport news to know what are the do's and don't s to enjoy your sport well without any worries and tensions.

f you would like to have a copy of the video or for more information on BSI standards on Buildings Accessibility and Web Accessibility,

Cricket academy in Delhi
Nice blog ,Thanks for sharing

Such a nice & useful post. Really happy to see such post. I have come to know about many new ideas. I will try my best to implement some of them. Thanks.visit our website

This is Very very nice article. Everyone should read. Thanks for sharing.

Creme of Nature UK has a wide range of Natural Hair Products options to help you achieve the look you want in the healthiest way possible. This new expansion of Creme of Nature provides styling products, hair color, shampoo and treatments. Explore our full range of products to meet your needs.

Thanks for sharing this