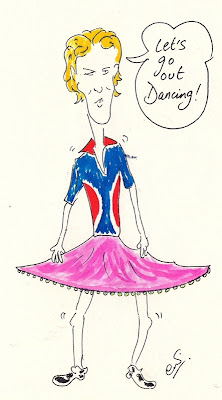 He is the daddy's boy. He is a lunatic arsehole. He is cricket's Barbie.

He is Stuart Christopher John Broad.

He may have an Ashes 5-for, he may have scored a test century batting at no. 9 at Lord's and he may have been walloped for 6 sixes in an over, but all that is to follow below is bloody miles away from his cricketing credentials.
So how do we start this?
Do we put a finger on his blondness and blame his acrimonious self and on-field bastardization on him being a towheaded? Probably no, because that would be demeaning the sane and sensible  lot of that light-colored hair folks out there. But yes, in a convivial sense, we can take it.
Wait, I guess we can do a bit better with couple of real life scenarios.
Howdy Broady!
Okay, lets put this straight. Broady is a serial petulant and that too a grouchy one. He is a natural dimwit of the highest echelon with a doped attitude that should make even the grandest of blockheads proud. He never fails to come across as a little Mervesque chuntering under his breath so the batsman thinks he is a psychopath rather than a little spoilt toddler.
It would be an understatement to say Broady boy makes a fool of himself by his heroics on the field, instead what makes him an intolerable rascal is his constant debating of decisions with umpires along with his berating of fielders who had the temerity not to stop a boundary off his awful bowling (ironic when he's probably the worst fielder in the team). The former is a pretty old trend of his now, with some memorable incidents (West Indies, South Africa tours in 2009-10) of squabbling and bickering with the men in-charge on the field, and amusingly, getting away with it all the time. Nasser Hussain recently put formally the manner Barbie has been pushing the limits of idiocy and misconduct for quite some time.
If this is not enough to tick you off, lets move on. Oh wait, lets have a quick laugh by watching the following clip.


He got ya, didn't he? Alright, as much as the ridiculous appeal was some show, the way he folded his arms and covered his face like a prepubescent girl not being given her doll, has to be one of the most dramatics acts ever pulled off in middle of a cricket field. 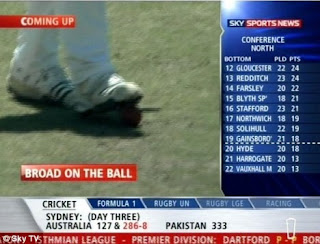 One fine January morning in Cape Town, Broady boy thought of fielding the ball with his spikes on it, instead of flexing his back and picking it up with his hands (Hey, bending 77 inches is not a norm for a slouch). Amazingly, it came as a shocker for the plonker that attempting to alter the condition of the cricket ball is an offense of level 2.2.9 according to ICC code of conduct. Probably, when he is done with his shoddy on-field heroics, he might one day come out of the curtain and pull off a Trescothick and tell us what he used to do with the cherry in his playing days.


Its another story that South Africans, at the end of it, did not pursue the complaint they made initially, but then we all thought this nincompoop will surely try correcting himself and turn up as a better product in future.
And THEN HE DID THIS!
This incident should not be new to any cricket follower reading this, but lets just briefly analyze this insane prickly act by Barbie.
Right, so what was said about this was that Broady was apparently  a bit 'frustrated' by the defiant knock of Zulqarnain and hence, decided to let the ball rip at him. We know some people dared to compare this to the Jones/Hayden incident in Ashes 05' which was largely nonsensical considering the stature of those two players, state of the match and above all, the manner of apologies given by the perpetrator. The half-hearted apology given here by Broad was more like saying to the batsman, "Oh, did it hit ya? Soz mate, fuck off." And you would have thought he would have been punished for this hideous stunt (and fracturing Zulqarnain's finger) a bit more than the formality-driven 50% match fee fine. Nope, sorry.
One wonders if Zulqarnain had walked down the track and wrapped his bat around Broad's head in a reciprocal act of "frustration", what would have transpired? Surely he would have got at least a 2 match fine along with the procession of bashing in the media, no? But, Broady boy belongs to well you-know-where, and is a son of, you-know-who, so lets try to absorb this too. However, this incident did revive the typical Broad snobbishness that the game has unfortunately got accustomed to lately.
Like Father, Like Son.
The irony is that dearest pops, Chris Broad, who has been an ICC referee for some years now, has often defended his brat for his on-field antics, basically terming him passionate, rather than doing a bit of a rap on his son's knuckles to remind him to mind his self next time. Hence no wonder, Barbie Broad gets away with all the arguing with umpires and proving the definition of a hoodlum every now and then.


So much for a man who was renowned to be an off-the-hook character in his playing days himself (Hint: Once Chris Broad refused to leave the crease after being given out by the umpire in a match against Pakistan). Daddy Broad should have groomed his kid in a better way and probably not sent him to  Melbourne in his teenage summers to play for Victorian North Division, which he credits for his boy-to-man transformation. On a second thought, perhaps spoiling the child is a family tradition of Broads until the day he becomes a Super Brat.

Listen bud, you know we don't like you neither do we like your stunts which you perform in the middle. There have been voices raised against you in a severe tone (deserved ones) from time to time in your short career. Yet, there is an appreciation of your cricket talent which one believes can do you good and England proud.
I guess you get the picture here (only if you transplant a brain in the upper storey), don't you? Get your shit together, stop behaving like a miscreant, get rid of your preening and play the game fairly. And then who knows, one fine day we all will start liking you.


Having done all this rhetoric bloody rant, we firmly believe Barbie Broady fully deserves to  be one of our Inglorious Bastards of the game.

And for an ending note, this should serve you well, eh Broady boy? (The game of cricket will forever remain indebted to Yuvraj Singh for this)
And since he is the famous Barbie of world cricket, the following should give a lighter tone to all this rant.
Comments, feedback and even hate-speech against this piece is welcomed (We want to know whether there is any love for Barbie in this world).
Posted by Masuud at 8:26 AM 18 comments: