In engineering, most students are taught Chaos Theory at some stage of their degree. My time came somewhere in the middle of my final year. Back then I was too rogue a student to get a grip on it, which to be fair, does not require much brains to fathom. Five years later, during my last month home trip, I was sitting with my father watching the highlights of the 4th day’s play of the second Test. When the highlights finished, my father-- who has been an academic for more than 45 years-- asked me what I knew about the theory and how the English capitulation of 72 all out could be related to it. Quizzed and being only able to tell the basic concept I knew of the theory, I gave in and requested him to surprise me. What transpired then is a gift I shall forever treasure. 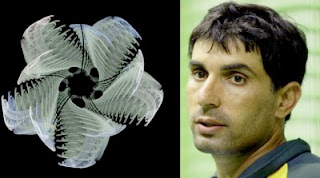 The sensitivity to the conditions in which an orderly system finds itself in is an essential element to induce chaos. It is supplemented by the Butterfly Effect which represents the reliance of a minor change resulting in major disturbance in the system’s state; kind of what Saeed Ajmal did with his ‘Teesra’ – which to everyone, except the English XI, never seemed to exist; and which in reality is an innocuous change playing with their heads, the modern cricketing equivalent of Spacey’s greatest trick the Devil ever pulled was convincing the world he didn’t exist.

Moreover, the sensitivity of seemingly orderly English batsmen to quality spin and the ineptitude to control the damage caused by it since the very first session till the 33rd session of the series, proved to be a fair example of Poincare recurrence-- the duration required to return to the initial state. Add to it the consistent pattern through which it happened makes a good case for the exemplification of chaos theory.
Control of chaos is another aspect of chaos theory. It involves applying a tiny perturbation in the system to obtain a desirable dynamical state. This control also helps in synchronization of the chaotic systems which becomes clear in any example where two different systems start from initial points and then end up being different exponentially. More like Ajmal with his usual variety psyching out the current best top seven of the world right from day one, along with the bamboozling by a till-then novel Rehman and the criminally underrated Hafeez. The end product was a camouflaged destruction of the powerhouse of the game.

Logical prognosis was defied through a methodological framework to madness, time and again during the series; whether it was running havoc in a batting line-up boasting matches and runs ten times their own or by setting up fields that would force the likes of Kevin Pietersen to play village cricket shots. Fractal repetition of planned out modes of targeting their preys were executed, typified by certain little things that had disproportionate effects; prompting the flapping of the butterfly wings. A colossal mindfuck, safe to say, was triggered. A mindfuck of sorts with which Gene Hackman and his paranoia in The Conversation could concur-- executed, in an alternate form, by a number one ranked English team.

Expecting the historically spin-handicapped England to read Ajmal off the hand was always going to be a Herculean task, but the staggering aspect was their inability to read Rehman and Hafeez’s conventional finger spin and the indecision whether to play all three of them forward or back. The minimum of feet usage was another abject demeanour of the English top order culminating in a regular procession of wickets. The failure to develop counters against spin and the schooling of the top ranked batsmen through it, had enough material to produce a DVD enriched with comical errors.

The fact that Pakistan came back twice in the series from the brink of seemingly dead positions bears testimony to their character for which alone, they deserved to be the worthy victors. At 54/4 in the 2nd innings at Abu Dhabi with still 16 runs behind England’s lead, Strauss and co had them under the cosh with Monty and Swann on top of their game and with the top Pakistani batsmen back in the pavilion. At that point, came the grind that for many Pakistanis has to be the defining phase of this series and one which epitomizes all the goodness in this team. With a mere 30 Test caps between them, Azhar Ali and Asad Shafiq sewed together a finely composed bond that, for the situation and the eventual outcome, brought Pakistan back in the game in a pretty enthralling fashion.

The second instance had even more promise and pride attached with it. Having been 44/7 in the first morning of the 3rd Test, few would have taken the stand against the betting market. But right then started a comeback of immense proportions which would ultimately end up joining the holy pantheon of Calcutta and Karachi. What unearthed there session after session was the naked exhibition of fortitude and mettle, a batting lesson in form of the contrasting hundreds of Younis and Azhar, a defence of the target by careful disintegration of the opposition which was already mentally shot to monstrous measure.

In retrospect, to call this clean sweep and all these numbers and records - which are Salvador Dali-esque in nature-- a product of the seminal metamorphosis Pakistan cricket went through in the last 30 months, won’t be an exaggeration. To have risen from the debris in which they would find themselves periodically, most of it due to their own doing, in such an overwhelming manner says a lot about the current crop and the men who have been in charge of them. To have shut the most venomous of critics and strongest of doubters through a constant wave of progress only instills and strengthens the faith that this is a side which believes in itself, does not only weave moments of inspirations together and knows the method to madness, something rarely associated with the ‘mercurial’ and ‘unpredictable’ tagged Pakistan of past years.

Call it method to madness, even if there is a slightest of it in Misbah's men. Or call it controlled chaos. History's equilibrium has been disturbed.

- This post was first published at The Sight Screen.
Posted by Masuud at 4:35 AM 407 comments: