I know its a bit dilatory to come up with something related to 2010 with the first week of new year already done but I guess I had to. Call it a formality or an urge to talk on it, I've picked 10 individual performances which stood out to me, along with couple of special ones which I watched live from the stands. England may have been the best team in all formats overall and India touching new heights in test cricket, but there is an arguable case of this year being one which had some of the most memorable individual spectacles witnessed in the current era of the game.

Personally speaking, it was a massive year in which I followed the game like a nutcase; probably the grand English summer had to do with it and attending games of England-Australia and then the ones having Pakistan with the two. Pardon me if I miss out any of your favorite ones in the following selection and I know there have been quite a few I have, but I focused more on the ones which had resounding impacts on the specific match and more imperatively, a follower's memory. Please note I haven't put these in any specific ranking, just tried prioritizing them on certain basis (with me being Pakistani, one; a self-confessed Indian cricket fan, two; and the rest of the lousy cricket world, being the third).


The beast of the year

There are steel nerves and then there are nerves of VVS Laxman.
India were 124/8, chasing 216 on a 4th innings disoriented track against an Australian team hellbent on proving points, he played one of the best ever test innings one could witness under pressure - Methodological, temperamental and artistic. And all this with a troubled back, with a runner in most of his innings. 73 may not sound much on a casual read but the monumental impact it had was only possible if you were watching it live, and rightfully he has been praised for this gem. Also proved why he has been a more major Aussie nemesis than any other contemporary cricketer.

Over the course of the year, he played 3 more humongous knocks- 103* against Sri Lanka at P Sara Columbo which enabled India to level the series, 91 versus New Zealand at Ahmedabad when India were in tatters at 15/5 in their 2nd innings and facing an unexpected knock out, and a truly masterful performance at Durban vs South Africa which enabled India to level a test series for the very first time in South Africa. Some people may rate his 103* versus SL as his better effort than the one against Australia, but as go personal picks and watching, the latter does it for me. He surely is one of my favorite cricketers and is probably one of the most unsung heroes of world cricket at present. Take a bow, Very Very Special Laxman.

There are days when you watch cricket and know some things are theoretically impossible to achieve. And then you realize there are monsters like Abdul Razzaq who make that inconceivable a joke. Much has been said about this one innings, from it being an unimaginable orgy of power hitting to an outrageous game stealer and what not. Every word is true and every accolade deserving of more overwhelming connotations. He played as if he didn't have a pulse and gave you the feel that he was sleepwalking this, and you wouldn't have known it would end up being one of the greatesr innings while chasing a formidable target. It easily goes down as the ODI innings of the year and one of the best in memory of any cricket follower. Furthermore, it also stamped his authority as being one of the very best finishers in limited overs formats, with the stats and viewing over 13+ years being valid proofs.

31st October 2010 was the day Razzler became a cricket god.


The fast bowling orgasm of the season

The overwhelming beauty and the holy essence of this spell still is encrypted in the minds of those who were blown away by this kid. The surreal state it left all who witnessed it live is not possible to jot down in mere words. He played god with the cherry that morning, shaping it like a banana both ways and acting as an artist painting a masterpiece in one-go. In space of 8 deliveries, he sliced the English top order in a manner rarely seen in modern cricket. The events that folded afterwards overshadowed his magic, yet this is a memory that will be cherished forever.

The daddy of WTFs

You will follow this sports all your life and even your best bets could vary, and you wouldn't witness such a stunning performance being pulled off once every second day. It was a one-man show of the grandest artistry and courage, aided by the appalling Yousuf & co and a defiant tail. From a dead-and-buried position he mastered Australia to a formidable score, which proved too much for the shattered opposition.

Suffice to say, he was most influential in inflicting one of the most forgettable test match defeats to Pakistan and the day itself went down as an apocalyptic one in Pakistan's history.

You know this was scripted somewhere in the heavens. The man who holds almost every batting record in the game had to do this and he did it with some style. Words would fail here but it should suffice to say it was the batting god at his divine best. He played only 2 ODIs in the year and to think he accomplished this humongous feat in one of them is no less than mind-numbing.

There are very few individual performances in cricket which can be separated strikingly from those of the rest playing the very same match. Add to it, the intense humidity of a Colombo summer evening, limping and dehydrated actor, and you may picture this phenomenal Afridi-ish innings. It was evident he was on an entirely different plain, with the rest of his teammates falling like ninepins on the other. In one specific delivery of Muralitharan the whole innings was summed up, when he danced down the track and lifted him over the sight screen and then fell flat on the pitch grimacing with pain due to cramps and backache. He couldn't finish the game off, yet this very knock has to go down as one of the best he ever played.

It was Sydney 2010 all over again - same teams and the same candy snatcher. It was an absconding and heart shattering show. In matter of few minutes, he mercilessly stole smiles from millions of delirious and frantic souls of one part of the world only to gift them to his countrymen. Even by T20's freakiest barometer, this stunner was off it. Even a richter scale would have found it tough to measure its impact.

This damned streak will forever haunt and resonate in the minds of any Pakistani cricket follower - 4, 0, 6, 6, 4, 6.. Game over. It was book cricket scoring. Period.

This was the innings and the day by the end of which the cricket world would have said it has seen it all when there is talk about inventive shot-making. It sure felt like that. This innings can only be gauged by the mesmerizing and carnage McCullum wreaked, constantly paddle sweeping Tait at 150+ kph, scooping Nannes on one knee, slog sweeping almost all the Aussie attack into the stands; and last but not the least, kept unleashing an orthodox power hitting avalanche with constant ease and brutality. It got its due share when it won the ICC T20 performance of the year award (well almost: Attention mr. Hussey).

Comeback of the year

He was returning to the test arena after 16 months, amidst the moronic circus of Pakistan cricket and with all the traumas that  had engulfed him, and ended up doing a masterclass against arguably the best bowling attack in the world. It was an impeccable knock, contained with assurance and class that he embodies, and it enabled Pakistan to draw the test match. This small matter of a quality hundred cemented the fact of him being one of the best 4th innings players in the game's history. It was the return of Younis Khan and it was as resounding as it could be.
The Fuck-You performance

A vintage rebuttal by the cricketer whose performances are classified as one of the most polarized in the game. Being ridiculed, bashed and clattered both, on-field and off-field, and then dropped for the previous test match, Mitch did a comeback display of titanic proportions. He blew England away at the most critical juncture of the series, first with a crucial late order half century and then producing one of the best fast bowling spells of the year post-lunch which was filled with breathtaking moments.

The best I saw live 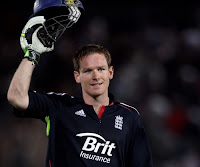 Being there witnessing it was an absolute pleasure. Those reverse sweeps are still afresh in the memory, and every bit of this innings is a bliss to behold. The mastery he demonstrated with the exemplary serenity and repose was a treat to watch, toying with the Aussie attack with ultimate ease. If Morgan was not recognized as a serious force in limited overs versions till then, and especially as a finisher, this high quality knock surfaced him in one of the best possible manners. From 97-4 to finishing it off with plenty of deliveries to spare, he was unstoppable.
The ultimate ODI spell

Pakistan was 0-2 down in the 5 game series and was cornered from all angles, both on-field and off-field. It was defending a modest ODI score of 241 and England were cruising at 201-5. Enters Umar Gul for his second spell. England lose their next 4 wickets for 3 runs in 3 overs of him, with him eventually ending up with a career best of 6-42. It was a sheer sensational display of fast bowling under lights. In both his spells he made the ball talk and sparked a turnaround of momentous proportions. What made it extra special was watching it live from the stands amidst massive tension and constant rounds between the Pakistani and English supporters (the spot fixing saga didn't help wee bit), and the scenario of Pakistan being nowhere in the series till then. It was Gull-dozing at its ultimate best.

- This post was first published here at Clear Cricket.

- McCullum's innings added after @Mykuhl input on it and my memory lapse/cricket overdose.
Posted by Masuud at 10:02 PM

Lovely stuff! Pak, Aus and one Irishman. Tells a lot about how you've perceived the year. Beautiful review.... I can fully identify with it haha. Love your writing style. Go Masuud!

Oh wait a minute... just spotted two Indians in the tags... I think they call this "selective perception" *lol*

Oh c'mon Wes, there's a Kiwi in there too! Makes it 5 countries, I sure can be multi-oriented in attention provision.

Nice information, you people can also go for the latest sport news to maintain updated information regarding those whom you love and want to know about in detail without making any mistake.

I saw Tendulkar Scoring 200, he was the one started this trend of scoring, Laxman's Inning was also a class one.
Read Some interesting 70 Cricket Facts now